Building upon the legacy of the award-winning GR series, the GR II offers the perfect balance between exceptional image quality and outstanding portability. It boasts a high-performance wide-angle lens and 16.2-megapixel APS-C size image sensor, delivering superb image quality with edge to edge sharpness. The GR II comes equipped with built-in Wi-Fi and NFC functions for wireless connection with smartphones and tablets while offering complete remote shooting functionality. Catering to the street and travel photographer, the compact, easy-to-carry GR II offers high-quality, high-resolution images delivered by a large image sensor, equal in size to those in PENTAX DSLR cameras. The GR ENGINE V offers a top sensitivity of ISO 25600, improved AWB control and high-sensitivity noise compensation. Never miss the perfect shot with a high-speed auto focusing system capable of capturing subjects in focus in a mere 0.2 seconds. The GR II provides a total of 17 effect modes, which allow the user to apply a variety of image processing within the camera to create the desired visual expression. Enjoy intuitive design, fast operation and wireless sharing with a compact camera that rivals DSLR image quality with the GR II.

The GR II features a compact, high-performance GR lens with a focal length of 28mm (in the 35mm format). This lens incorporates two high-precision aspherical optical elements and a high-refraction, lower-dispersion glass element to minimize distortions and chromatic aberration, while reproducing sharp, high-contrast images even at edges of the image field. Thanks to its 9 blade iris diaphragm, the lens creates a truthful sense of depth and a natural bokeh effect, while allowing the user to capture beautiful light beams at closed-down apertures. The manually adjustable ND (neutral density) filter allows you to open the aperture up, even under bright sunshine, for a wider range of creative expression.

Featuring a large, APS-C-size CMOS image sensor with approximately 16.2 effective megapixels, the GR II provides a top sensitivity of ISO 25600. By reprogramming the AWB algorithm, it assures more precise white-balance control under artificial lighting such as fluorescent lights, while reducing the color bleeding of green hues in outdoor shooting. 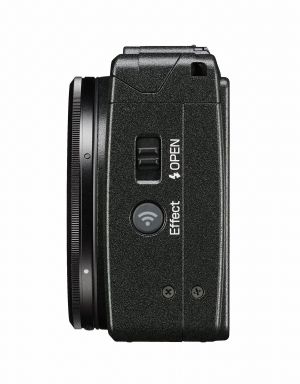 Even though it incorporates a host of Wi-Fi functions, the GR II comes in the same size as the GR. Its exterior housing is made of lightweight, high-rigidity magnesium alloy. The body is designed for maximum holding comfort and operational ease, with all control buttons laid out for easy access and shooting convenience. 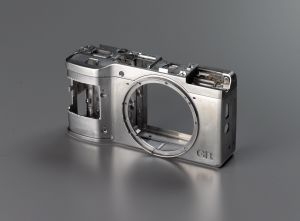 The GR II provides a total of 17 effect modes, which allow the user to apply a variety of image processing within the camera to create the desired visual expression. Including Clarity and Brilliance, six modes have been newly added to the selection, allowing the user to adjust some parameters to the desired level. The user can set the desired mode simply by pushing the Effect button on the camera's side panel. 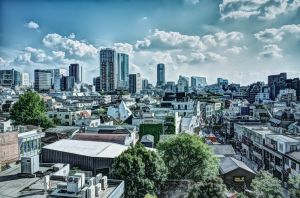 The GR II captures beautiful Full HD movie clips (1920 x 1080 pixels, 16:9 ratio, 30 frame rate) in the H-264 recording format. By teaming this function with the GR lens and the large image sensor, the GR II assures high-quality movies. During movie recording, the user can also adjust exposure compensation and use the AF button to activate the AF operation, whose speed is faster than before. Three new effect modes (Bright, Portrait and Vibrant) can also be used in movie shooting.